There is a good news for millions of small investors in India as they will be able to earn more from popular post office schemes like Public Provident Fund (PPF) and Monthly Income Schemes (MIS). The government has raised interest rates on these investments by up to 0.5 per cent and this comes into effect from 01 April, 2012. 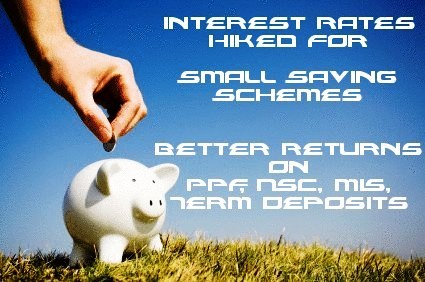 As you might already know, the interest rates on EPF (Employee Provident Fund) was decreased by the govternment and to make up for it, the returns on other small saving schemes like PPF and MIS has been increased.

I believe that this hike in the small savings schemes from the post office will continue to attract more investors and the banks will have to increase the deposit rates to attract investors.

What do you think about this hike in the interest rates on the office. Does this attract you enough to start a small savings scheme with the post office? If you are still thinking about making your first inverstment, you may like to read about the importance of investing and how to get over the fear of investing.